THIRUVANANTHAPURAM: More than a decade after the city corporation launched a housing scheme under Basic Services to Urban Poor (BSUP) at Poonkulam, the civic body is planning to revive the project. It has decided to engage an external agency the College of Engineering, Thiruvananthapuram to conduct a stability audit on the construction that had not proceeded since 2010.

The civic body had signed an agreement with accredited agency Nirmithi Kendra in 2008 for Rs 2.96 crore. The project included 120 houses in six blocks along with basic facilities for the community. In 2009, the corporation paid Rs 39.32 lakhs in advance.

Works up to the lintel on the third floor of the first block, and the plinth beam of the second block were completed. The engineering wing has communicated that the structures done almost a decade ago will have to be certified for stability if works need to be resumed.

While the project was initially slated to be completed at Rs 2 crore, the cost was revised to Rs 9 crore by 2014. The cost will further rise, and the corporation has decided to levy the amount required for stability certification from the agency entrusted with the construction in 2008.

Poonkulam was one of the 23 colonies included under the BSUP. The project aimed at integrated provision of basic services and amenities and provided for housing, roads, water supply, street lights, solid waste management and anganwadis. About Rs 1.2 lakh was granted for houses with two rooms, kitchen and toilet ranging 30 sq m to 60 sq m plinth area with 12% beneficiary contribution. Projects with a total estimate of Rs 208 crore were planned to be implemented in four phases.

While 23 colonies with brand new apartments were to be constructed across various wards as per the plan, by 2015 when the deadline ended, not even less than half of the target had been covered. 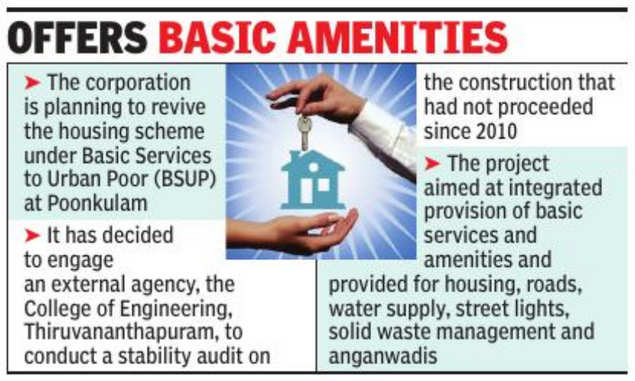 Out of 28 blocks at Karimadom Colony, 12 blocks were dropped. Seven blocks had been completed, and the corporation had to seek permission to complete the ongoing work on nine blocks. Construction of colonies in 13 coastal wards too had to be dropped. At Kannamoola, seven blocks out of the total 23 blocks had been completed in 2015, and no further construction was initiated.

The city corporation faced a dilemma at Poonkulam since construction had reached a stage where the buildings lacked roofing. As regarding the projects meant for housing colonies at Thycaud and Kadakampally, the city corporation could not even finalise the list of beneficiaries. At Rajiv Nagar Colony, 22 blocks out of the total 30 blocks were completed in 2015 and no work would be initiated on the remaining blocks.