HYDERABAD: A judge of Telangana high court has referred the matter of illegal structures to a division bench urging it to get data on such buildings collected from all the 30 GHMC circles covering 150 wards in Greater Hyderabad.

Justice Challa Kodandaram, who has been hearing petitions relating to illegal buildings, said owners of illegal structures and illegal builders were misusing the court’s interim orders to complete construction without any hurdles.

Justice Kodandaram on Wednesday referred such matters that came to his notice to the high court registry with a direction to place them before the chief justice whose bench was hearing PILs on the issue. He also found fault with civil courts for granting status quo even after a division bench of the high court had earlier asked them to exercise caution while dealing with illegal structures.

Saying that scores of civil suits were being filed in Hyderabad civil courts with the ultimate aim of getting them dismissed, the judge said a closer look at the statistics furnished by GHMC had shown that owners of illegal structures who approached the civil courts against demolition notices were never really bothered about the end result of cases.

“They were interested only in getting an interim order and complete the construction. Once the construction is done, the owners and their lawyers stop attending court hearings and invite orders of dismissal for default in appearing. A dismissal order is all that they precisely need once their purpose is served,” the judge said.

He said the GHMC or the municipal administration department were found on the wrong side because the records did not show any earnest effort to get the injunction orders vacated. “The case will now go before the CJ,” he said while hearing a contempt case filed by R Narendra Babu. 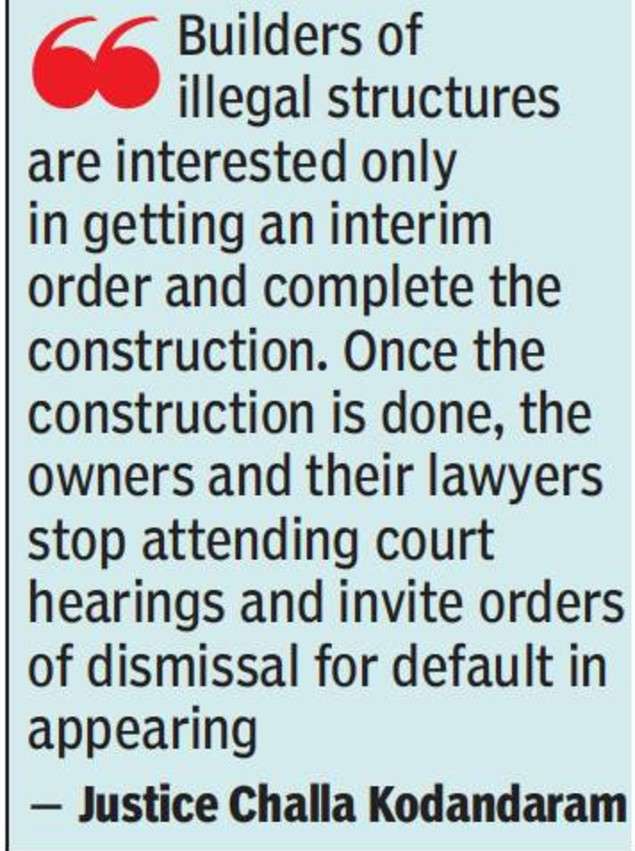 “They are using the courts to achieve their goals. Whenever they receive a demolition notice from GHMC, these owners or builders are approaching the civil courts urging them to restrain GHMC from interfering in their properties. If courts ask officials and owners to maintain status quo, it means both parties have to stop their work. But in Hyderabad, such status quo is read as a stay on GHMC alone. The owners use the very same orders that restrained them to complete their illegal structures,” the judge said.

GHMC officials and its ground staff too were more than willing to read the court orders this way though the real import of the court orders may not have been exactly be the same, he said. “Some times, a mere notice from the civil court is enough for them to stay away from their duty,” he said. “It’s better they are heard by a division bench for arriving at a comprehensive solution,” the judge said.