According to data from the SRA, 516 Letters of Intent (LoIs) were issued between March 2019 and April 2021, including those that were re-issued as they were stuck for a long time and 82 new ones. In the period from April 2017 to March 2019, 184 LoIs were issued. A builder can begin redevelopment of a slum plot only after an LoI is issued by the agency.

“We have not just issued fresh LoIs, but also issued revised LoIs in several cases where projects were stuck and have fast-tracked procedures in the SRA,” Satish Lokhande, SRA CEO, said. “The aim is to ensure that the maximum number of slumdwellers are rehabilitated as soon as possible. We are bringing in several changes to facilitate this,” he added.

In December 2020, the agency began sending notices to developers who have failed to start their projects even after getting requisite clearances. 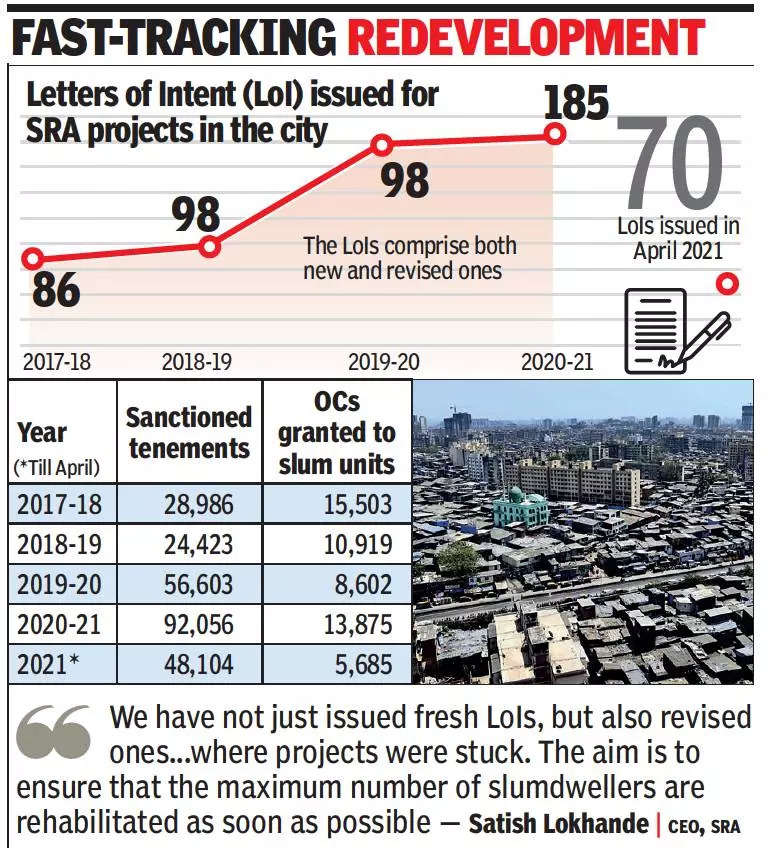 Housing minister Jitendra Awhad had recently said that he was pushing to fast-track SRA projects and that the agency would take over projects where the developer has failed to rehabilitate the slumdwellers. “The SRA plans to take over all projects which are at standstill and have taken big fat loans from financial institutions and left the poor on the streets. The very aim is to give homes to the poor and pump in money for SRA. Just having LoI does not make u the owner of the property,” he had tweeted.

Around 2.1 lakh families have got new apartments in the 23 years since the SRA was set up. According to SRA estimates, there are 12.5 lakh slums in Mumbai housing 62 lakh people. In December 2020, the state government had set up a 10-member committee to ensure speedy disposal of complaints pending with the SRA, including cases of corruption and red-tapism. According to officials, projects are stuck for various reasons, including lack of funds or complaints by tenants against the builder. According to estimates, one lakh slumdwellers are affected by the “dead” SRA projects.