PUNE: Inoculation drives for people such as construction workers and vegetable vendors, who are in frequent contact with multiple citizens, would continue to be affected if the vaccine supply was not streamlined, said officials, who attended the weekly Covid review meeting held under deputy chief minister Ajit Pawar.

“Health experts have emphasised on 100% vaccination of people coming in contact with multiple citizens. But there is less momentum in such an initiative due to the erratic supply of vaccine,” an official said.

Nearly 90-100 camps have been set up to vaccinate around 35,000 construction workers. A report submitted during the review meeting on Saturday stated that nearly 23,295 citizens in the category have been so far vaccinated. “However, there are several more waiting for the vaccine and the shortage of vaccine has affected the drive,” the official said.

State technical adviser and member of task force Dr Subhas Salunkhe has in his suggestions to the Pune administration that 100% people in the category should be vaccinated. 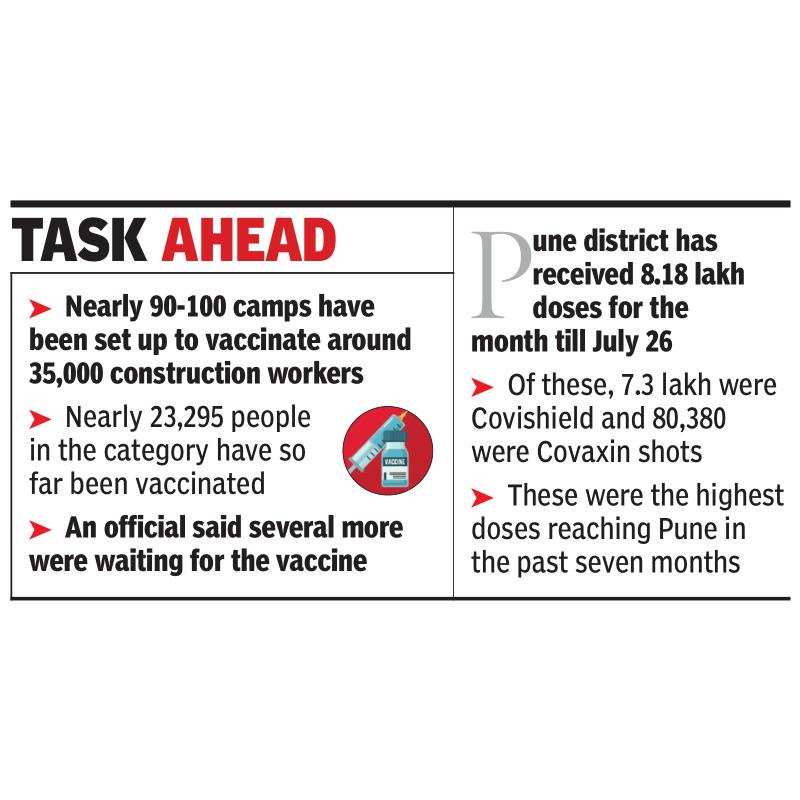 Dr Sanjay Deshmukh, assistant director (health), Pune circle, streamlining the supply of vaccine could enable setting up of more camps for the beneficiaries in the category.

Developers, on their part, have taken responsibility for full vaccination of the construction workers. Confederation of Real Estate Developers Association of India (Credai)-Pune president Anil Pharande said the developers had been for the past two months trying to organise vaccination camps, but could not do so due to lack of vaccine.

“The construction workers go to the government and private vaccination centres. But these centres are far from their workplace. We have been seeking for supplies, but have not been able to manage any so far,” he said.