MUMBAI: Construction restrictions within a 10km buffer zone from the boundary of the eco-sensitive Thane Creek Flamingo Sanctuary are likely to affect real estate projects in large parts of Greater Mumbai. A recent circular issued by the development plan (DP) department of the BMC has sent shock waves in the construction industry.

The circular, a copy of which was made available to TOI, said it will now be mandatory for builders within this zone to take prior construction permission from the National Board of Wildlife. Environmentalists say the buffer zone should not be looked as ‘anti-development’.

Projects in 15 wards in Mumbai are covered within the 10km buffer zone, according to the BMC circular.

Vinod Chitore, who heads the BMC’s DP department, said builders whose projects fall under the buffer zone will first have to get clearance from the forest department before their plans are approved by his department.

Builders and environmentalists seem to have opposing points of view on construction restrictions within a 10km buffer zone from the boundary of the Thane Creek Flamingo Sanctuary.

Builder Deepak Goradia, president of Credai-MCHI, said that as per a December 2018 Supreme Court order, the 10km buffer should be applicable to all forest sanctuaries where the state has not decided eco-sensitive boundaries. He said states were given the liberty to finalise and revise the buffer zones.

“Last March, the Maharashtra government finalised the ecosensitive boundaries to 3.89km and sent the proposal file to Delhi. The Union environment ministry called for objections and suggestions and the 60-day period got over in June. We are awaiting the final notification from the Centre,’’ said Goradia. 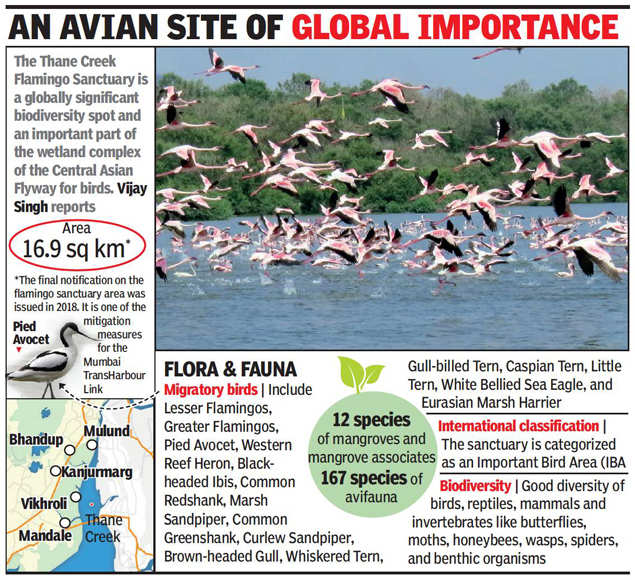 Vinod Chitore, who heads the BMC’s DP department, said, “We hear that the Union environment ministry is expected to reduce the buffer zone, but so far there is nothing on record and this circular will apply till then.”

The BMC circular referred to a letter from the deputy forest conservator, Thane division, stating that prior permission is required for all development/construction works falling within the 10km buffer zone.

leading Mumbai developer said, “The necessary conditions of the Supreme Court order of 2018 have been complied with and the boundary distance has been published already. This sudden BMC circular will have a huge negative impact on over three lakh migrant workers who have only just returned to Mumbai and on projects worth more than Rs 5 lakh crore. The authorities must resolve the matter since such sudden shocks have a huge negative impact on investor and buyer sentiment.”

It is vital to strike a balance between environmental protection and development. The buffer zone around the Thane bird sanctuary is essential but extending it to 10km could affect hundreds of construction projects in Mumbai. The Thane forest dept must only ensure that no green cover is destroyed around the sanctuary. Extending the buffer zone to areas like Dadar and Kurla makes little sense.TimesView

Environmentalist D Stalin said, “It only means that constructions that involve extensive destruction of nature will face hurdles. But even those will be cleared case to case using proper mitigation measures. Right, now all builders have a free run without any safeguards or mitigation in place. The ecological areas inside the buffer will get protection. Construction is not banned, it’s regulated.”

“The ministry had invited objections and suggestions to the draft notifications and these have been forwarded to us. We shall now be adding our remarks to objections/ suggestions and placing it before the expert appraisal committee of the MoEFCC for a final decision. A meeting is scheduled for the second week of August,” said Virendra Tiwari of the Mangrove Conservation Cell.

The final notification declaring 16.9 sq km as a flamingo sanctuary was issued in 2018. It is one of the mitigation measures for the Mumbai Trans-Harbour Link.