JAIPUR: The state government on Saturday will launch a six-month special campaign, christened ‘Shahar-2021’ in the urban areas to resolve citizens’ problems after organising camps in the urban local bodies.

The opening day will record a ceremonious procession with a band, where five families will be issued lease deeds at chief minister Ashok Gehlot’s residence, after they reach there from Bais Godam Circle.

Urban Development and Housing (UDH) minister Shanti Dhariwal said, “Our government is seriously working for the success of the campaign through close monitoring, with the objective of providing the much-desired ‘ease of living’ to the common citizens.”

A special website — ‘shahar2021.rajasthan.gov.in’ — has been developed containing the online application facility. Training has been imparted to officers of local bodies to run the online system. Also, to render technical assistance to the citizens, 600 ‘Nagar Mitras’ have been registered for all towns of Rajasthan.

Advisor to the government and former UDH principal secretary GS Sandhu said, “Due to the long Covid pandemic, which adversely affected the financial condition of the common man, several rebates and concessions including reduction in interest charges have been announced.”

The state government’s aim is to issue 10 lakh lease deeds during the campaign. It has been majorly emphasised to provide lease deeds in old areas of the Walled City. 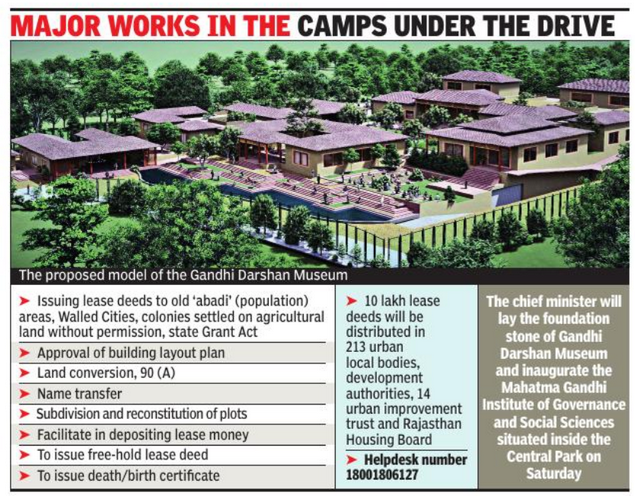 An official said that as the well known cities and towns in Rajasthan came up during the erstwhile princely states and some of the towns are centuries old, with Jodhpur being about 600 years old, Udaipur about 500 years, Kota about 400 years and Jaipur about 300 years, around 35 to 40 lakh residents living in these areas do not have lease deeds.

“In 2015, an amendment was carried out in the Rajasthan Municipal Act, 1959 enabling issuance of title deeds to these residents by urban local bodies in lieu of their surrendering of the editing rights by them. However, this provision was scarcely used and remained on paper. The present government has decided to revisit the relevant provisions, rules and circulars to issue the lease deeds and benefit the residents,” added the official.