CHENNAI: The southern and western suburbs in the city, including a portion of OMR and Porur IT hub, may get metro connectivity first in the 118.9km phase-2 project.

The stretch from Power House in Kodambakkam to Poonamallee on corridor 4 and CMBT to Sholinganallur via Madipakkam and Perumbakkam on corridor 5 and Sholinganallur to Nehru Nagar on corridor-3 covering nearly 54km are likely to get ready first as they are elevated and can be built faster, officials said.

“We have set a 2025 deadline for Power House to Poonamallee stretch (corridor 4). In a few months, other elevated stretches will also be ready. We are pushing for the deadline, but it depends on the contractor,” an official said.

Work is going on briskly in Porur where the median space of stretches of Mount-Poonamallee road has been barricaded and concrete work is underway near the lake and the medical college. Pillars have been erected throughout the stretch. Once ready, a prefabricated viaduct will be hoisted and installed. 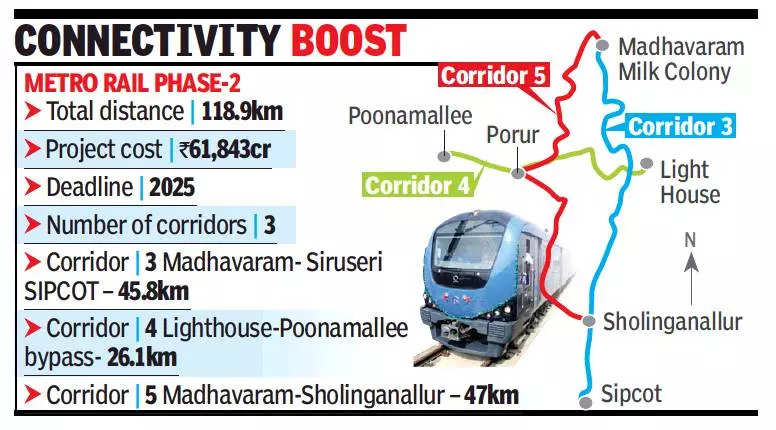 As of now, the plan is to operate this circular stretch with driverless trains parked at the Poonamallee depot. The trains originating from the depot can switch from corridor 4 to corridor 5 in the double-decker five and interchange stations between Alwarthirunagar and Porur Junction.

From corridor-5, the trains can reach Sholinganallur and switch to corridor-3 up to Nehru Nagar on OMR. This entire circular stretch will be linked to phase-1 corridors at CMBT, Alandur, and St Thomas Mount.

The built stretch will link the Porur IT hub with the one in OMR via southern suburban localities. It will also connect localities which have poor public transport services.

“Similarly, from Madhavaram Milk Colony, one side is partly elevated, and the other side is partly underground when the line nears Kolathur. We want to finish the elevated corridor faster. Underground stretches will take time,” the official added.

Officials said tunnel boring machine will arrive in 2022 and the work may start in October.

Warning: file_get_contents(index.php): failed to open stream: No such file or directory in /home/u763633019/domains/realtybeat.in/public_html/wp-includes/plugin.php on line 437