From the way metal prices have moved in recent weeks, it looks like the wheels are falling off China’s property market.

The price of iron ore futures in Dalian has dropped by half over the past two months, accelerating Monday after the government announced fresh winter pollution curbs for northern steel-producing cities, which typically cut output and demand for rust. Add to that the travails of China Evergrande Group, the property developer that’s at risk of defaulting on some of its $300 billion of liabilities, and it makes up a bearish picture for ferrous metals.

China consumes half the world’s steel, and its property sector alone accounts for about a fifth of global demand, according to Liberum analyst Tom Price. Should a Lehman-style crisis spiral out from Evergrande, the impact would be dramatic. Just how dramatic, though? A look at past steel crises gives some clues.

Take the 2008 Lehman Brothers Inc. bankruptcy. U.S. steel demand had spiked in 2006, just as the property market was on the turn. Peak-to-trough, the decline was dramatic, falling more than half by 2009 before gradually picking up speed to its current reasonably steady state about 15% below 2006 levels.

In other downturns, the slumps were more muted. Japan’s steel output fell by only about 20% from 1991, when its housing bubble burst, to its a low point three years later, before gradually edging down further during the 1997 Asian financial crisis and the 2008 Lehman shock to its current level about 30% below the peak. South Korea barely paused for breath in 1997, with production dropping by a third the following year before quickly recovering and entering a boom that’s still going on. 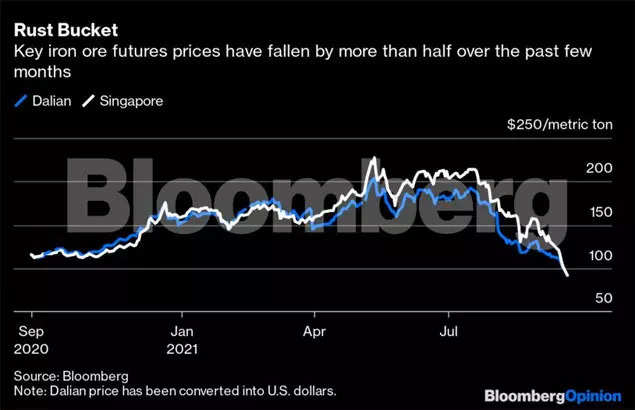 On the other hand, there is one more baleful example to consider: the former Soviet Union, where output slumped to just a fifth of its 1988 level after the fall of communism, before gradually crawling back in recent decades to about 40% of peak volumes.

One lesson from all of these episodes is that steel demand rarely recovers altogether from an epic financial crisis. In the best of times, ferrous metal consumption tends to decline once an economy moves from its resource-intensive industrial development stage toward a more affluent service economy. That’s exacerbated by the way that steel demand is fueled by property and infrastructure, which in turn are fed by a supply of credit that can seem boundless until, suddenly, it isn’t.

It’s not a coincidence that one popular indicator of financial crises is the Skyscraper Index, which argues that ruin follows every time a record-breaking tower is built: Skyscrapers, after all, are among the most steel-intensive structures ever built. That lesson will be front-of-mind for Evergrande’s lenders right now. 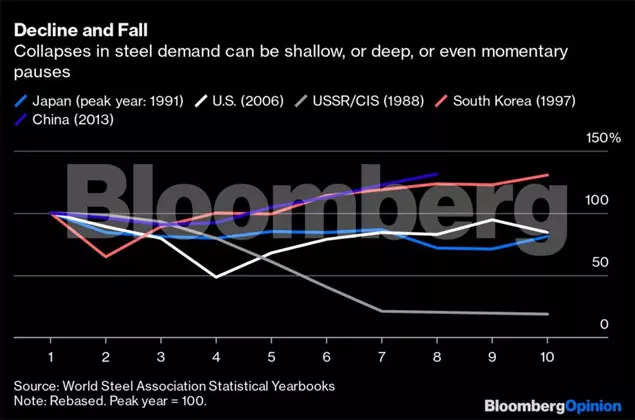 The question is, what sort of crisis is China facing? It’s unlikely that it will be able to follow the trajectory that South Korea enjoyed after the 1997 crisis — because demand from China itself played a major part in that recovery, and there’s no equivalent economy out there to save the day. The potential of a Soviet Union-style meltdown should perhaps not be discounted, given the similar role of state-directed over-investment in each economy. Still, China is also vastly more exposed to and supported by the global economy than the USSR ever was — and if such an event were to happen, the path of steel demand would be the least of the world’s worries.

In one sense, we’ve already seen this story. China itself suffered a mini-crash after 2013 when its post-2008 stimulus came to an end, with consumption falling by about 10% over the next two years. That glimpse into the abyss, and the credit-fueled construction splurge unleashed to prop up economic growth afterward, is one factor in the problems being faced now by Evergrande. Apparent steel use last year was nearly a third higher than the previous record, and for all the government’s promises of output curbs, usage as of July this year was running nearly 10% higher still.

That’s good reason to think that markets are overreacting to a moment in time when yet another Chinese mega-conglomerate is teetering just as the the country’s typical construction cycle slows and Covid-hit flows of ore flood into a well-supplied market. One thing worth checking is the price of the reinforcement bar used on construction sites, which is at almost exactly the elevated level it was two months ago before its key ingredient started its plunge. That suggests that end-use demand is still pretty much where it was before this panic started, which should deliver mill owners handsome profits. 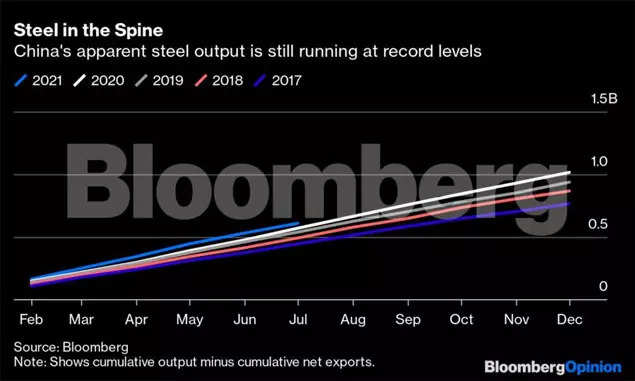 China’s steel sector will ultimately decline, as the steel sector of every country eventually does. As a matter of policy, the government is determined that consumption and emissions will peak by 2025, with a shift toward using more scrap instead of imported iron ore and coal. Turning this ship around, though, is bound up in politics and a national business model founded on heavy capital investment. That maneuver can be guaranteed to take a while.

The sheer scale of the country’s steel industry means we must all pay attention when its appetite wavers — and current prices shy of $100 a metric ton would be considered ample in almost any other year. Still, we’ve not yet seen the reckoning with its steel addiction that China, and the world, ultimately needs. Until that happens, don’t assume this market is dead.