NOIDA: A Mumbai-based company that brought down the illegal Maradu waterfront apartments in Kochi in January 2020 has proposed to demolish the twin towers at Emerald Court through charges that will trigger a controlled implosion, which will bring them down in a heap without affecting the nearest building just nine metres away.

Apex and Ceyane, the twin residential towers built by Supertech, were held illegal by the Supreme Court, which had in an order passed on August 31 this year upheld the Allahabad high court’s directions to bring down both towers. Since then, a hunt has been on to find an agency with the expertise to demolish the towers without harming other Emerald Court buildings, particularly the closest one, Aster-2. The Supreme Court had ordered the towers, which are unoccupied, to be razed within three months.

In its presentation to the Noida Authority brass and residents of Emerald Court, Edifice Engineering proposed a ‘waterfall implosion collapse mechanism’, a methodology used to pull down the 108-metre-tall Bank of Lisbon building in Johannesburg in April 2019. Apex, the taller of the two towers, is 100 metres. For the Johannesburg exercise, the available ground clearance (7.8 metres) was less than Emerald Court’s nine metres, officials said, underlining buildings have been brought down safely in a challenging landscape before.

The demolitions will take a few seconds, but the entire exercise will take around 26 weeks end to end, from preparations to clearing the site of the debris.

The slightly shorter Ceyane (97 metres) will be the first building to come down, according to the proposal. Apex will implode in the direction of Ceyane by inducing a ‘lateral pull’ away from the other buildings on the compound. Both towers will collapse inwards and the debris will fall into the cavernous basement space.

The term ‘waterfall’ is used as the collapse of a building is engineered to replicate water hitting the ground from a height.

For the implosion, holes will be drilled in columns, beams and shear walls of the two buildings. To prevent high-velocity debris from flying around as a result of the explosives, a wire-mesh will encase the parts that hold the charges. The columns will be wrapped in geotextile cloth, which will also be placed around the structure to minimise the impact of debris.

Finally, the company proposes to stack up a series of shipping containers over each other between Apex and the rest of the Emerald Court compound, right from the basement level. It proposes to load the containers with sandbags to absorb shockwaves and any debris that breaches the geotextile insulation.

The Emerald Court compound, where 650 families live, has a gas pipeline that will need to be shut off, officials said. The implosion will kick up a dust cloud and it’s likely that movement in the airspace above the towers situated in Sector 93A will have to be stopped for 10-15 minutes for the dust cloud to settle down.

The company, which made a video presentation, said the buildings can be brought down within three months and another three months would be required to clear the debris. An estimated 3,000-3,500 truckloads of debris will have to be moved out of the site. The clearing will require time as salvageable and recyclable material such as iron and steel will be sold as scrap to recover the demolition cost, which will run into several crores. 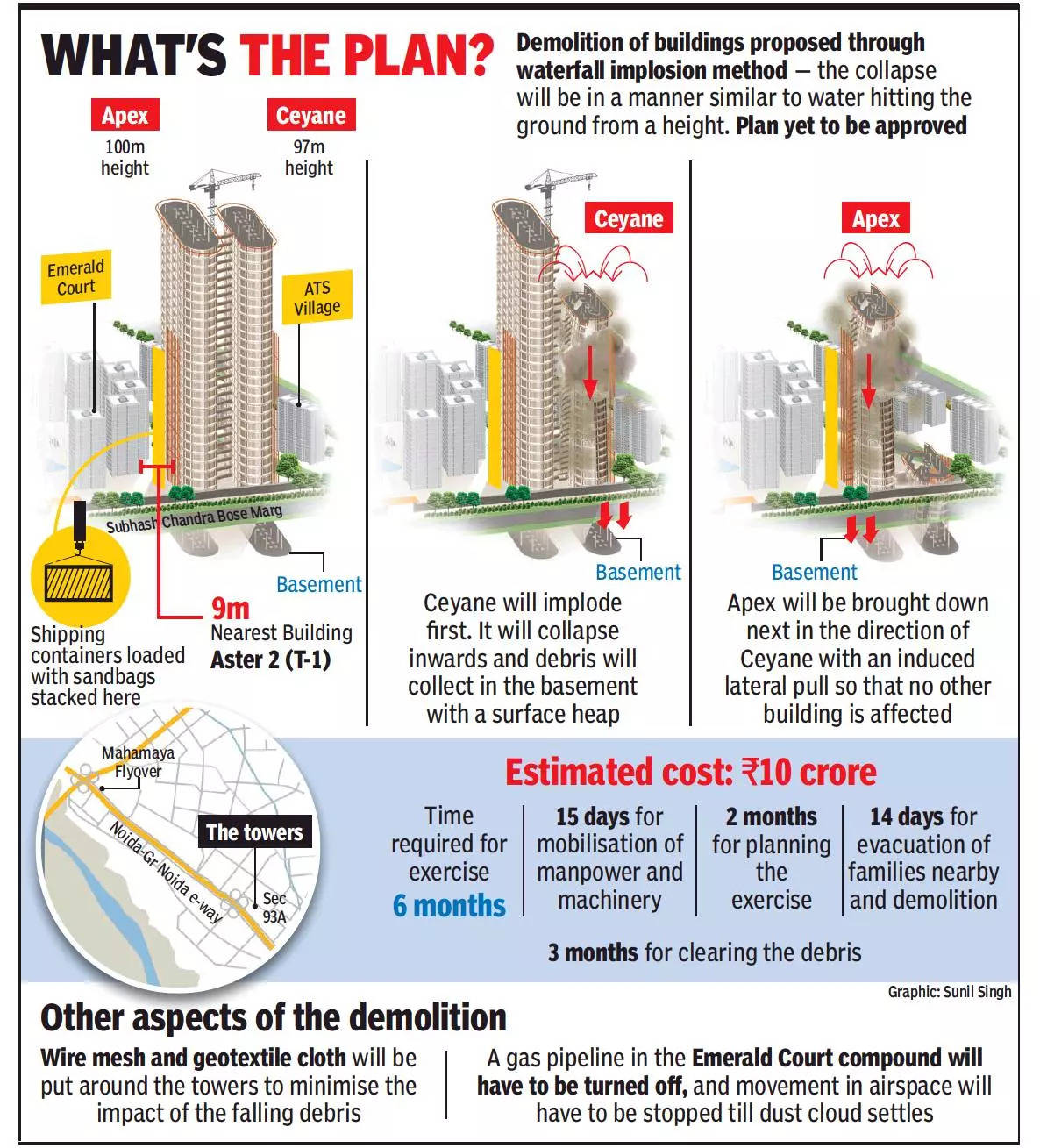 Noida Authority CEO Ritu Maheshwari said the company’s proposal has been referred to the Central Building and Research Institute for feedback before a final decision is taken.

“We are also going to examine the action plan minutely internally and our team will compile their queries. Suggestions of the residents will be taken as well, in the later stages,” said Maheshwari.

Uttkarsh Mehta, partner at Edifice Engineering who made the presentation, said, “We have submitted our action plan with Supertech Limited and Noida Authority. They can share more details.”

Emerald Court RWA president UBS Teotia attended the meeting along with two other residents. “We are convinced that the buildings can be brought down safely without causing any harm to the nearby structures. We have asked the Noida Authority to provide insurance cover for our structures just in case something goes awry during the exercise. But we will give our consent once the Authority is ready,” Teotia said.

The legal battle against the twin towers was fought by the RWA.

Noida’s additional CEO Neha Sharma said, “We will hold a discussion with CBRI experts in a day or two to discuss if any further clarification is required.” Another company from Mumbai has also sent a proposal. Officials said additional information has been sought before the company is invited for a presentation.