By Nupur Acharya and Dhwani Pandya

Recent weakness in India’s red-hot property stocks could be short-lived as record low interest rates and an economic recovery from the pandemic fuel demand from an increasingly affluent middle class.

That’s the view from market watchers, who see large listed firms emerging as the biggest beneficiaries amid an ongoing consolidation in the $200 billion sector. While the S&P BSE Realty Index slid 3.1% in August, the 10-member gauge is up 24% this year and on track for a sixth straight quarterly gain — the longest run in Bloomberg-compiled data going back to 2007.

“The growth and scale in the sector will come from the middle class,” said Sharad Mittal, chief executive officer at Mumbai-based Motilal Oswal Real Estate, which has cumulative assets under management of 46 billion rupees ($630 million). “Consumers are preferring large developers who are well capitalized and well perceived.”

India’s property market is rebounding after being in a down cycle for the last six years as a series of headwinds ranging from the pandemic, a bad-loan crisis and a surprise 2016 cash ban hurt demand for new houses and apartments. 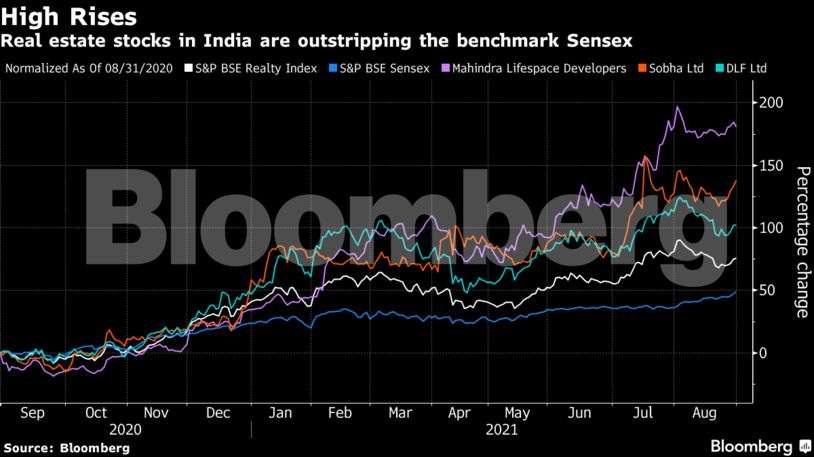 Stronger sales and weak launches are leading to faster absorption of outstanding inventory and this favorable demand-supply situation has started to build a case for price increases, according to Murtuza Arsiwalla, director of research at Kotak Institutional Equities.

What Bloomberg Intelligence Says:
Despite the recent run-up, Indian real-estate sector still stacks favorably when compared against China, U.S. and some of the key South Asian peers. For example, the $30 billion capitalization of listed property stocks in India is a fraction of China, Hong Kong and the U.S., and trails even the smaller Asian markets.

Presently contributing 6% to country’s GDP, the real-estate sector is expected to reach a size of $1 trillion by 2030.
– Nitin Chanduka and Marvin M Chen, analysts.