KOCHI: The real estate players of Kochi are expecting a revival of the sector, as part of the nationwide sentiment triggered by the slow opening up of the economy, but the sector is also witnessing rising raw material costs triggered by the pandemic.

“There will be a surge in demand in Kochi too, as what is happening across the country,” Sunil Kumar, managing director, Asset Homes and executive member, CREDAI-Kochi, said. “However, the construction cost in Kerala has gone up considerably during the pandemic period making it unaffordable,” he said.

“The construction costs have gone up in two ways — the first being the higher prices of raw materials, which comes around Rs 350 per sq ft and secondly Rs 500 due to the unavailability of GST input tax credit. In effect, the per sq ft price have gone up by Rs 850 in Kochi,” Kumar said. “A boom might be coming in Kochi too, but the question now is whether the market will be able to absorb the increase in construction costs,” he added.

“Kochi’s real estate sector relies much on non-resident Keralites (NRKs). Except for the affordable housing projects, NRKs account for 60% of the overall clientele,” he said. According to him, this segment will strengthen only if the borders are opened up and air travel becomes cheaper. 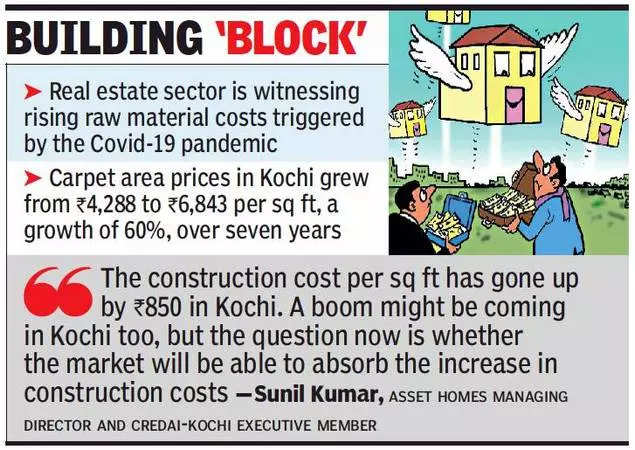 The carpet area prices of real estate properties in Kochi has been increasing steadily over the past seven years, shows the National Housing Bank (NHB) Residex, the housing price index of the regulatory body for housing finance companies. Overall, the carpet area prices (at the assessment prices) in Kochi grew from Rs 4,288 to Rs 6,843 per sq ft, a growth of 60%, over seven years.

And the rental market in Kochi is sitting on a huge stockpile of flats and independent houses, though there is a modest improvement in the situation. When TOI had contacted M A Aslam of A Star Realtors, a real estate broking agency, in April, the firm had a list of nearly 1,000 flats available for occupancy at Kakkanad. And it was only a tip of the iceberg – back then Kochi had 5,000-10,000 flats or houses being vacant. However, after five months, things have started changing.

“Now we have a list of only 300 flats,” said Aslam citing the fact that people have started slowly coming back.