GURUGRAM: Around 8,000 hectares of the Aravalis in Faridabad are not part of the Natural Conservation Zone (NCZ), the Haryana government has pointed out. This is likely to pave the way for constructions in the green area, an issue that has led to several court petitions by environmental activists.

In a letter to all the districts, principal secretary (town and country planning) AK Singh has said that the protected Aravalis should be defined according to a 1992 notification by the Centre, which says that the “specific areas” of the forests are limited to Gurugram in Haryana and Alwar in Rajasthan.

“It has been noted that in the revenue record, there is no term namely ‘Aravalli’, rather there is only mention of ‘Gair Mumkin Pahar’. Accordingly, some of the districts have identified the areas recorded as ‘Gair Mumkin Pahar’, in revenue records, under NCZ by considering the same as ‘Aravalli’ and simultaneously highlighted the same for decision by state level committee for NCZ,” the letter said.

It further said, “On this issue the attention was drawn towards the minutes of the meeting held under the chairmanship of the chief secretary, Haryana in March 2017, wherein on the issue regarding identification of Aravalli, the following is recorded: ‘…Government of Haryana may consider this notification in old district Gurugram only and areas specified in the notification dated 07.05.1992 may be considered as Aravalli. Definition of Aravalli may not be extended to other Haryana sub-region areas which are not defined in the Aravalli notification dated 07.05.1992 unless the same is done by MoEF&CC through a similar notification. So only ‘specified areas’ in old district Gurugram existing on 07.05.1992 may be part of ‘confirmed NCZ’.”

The letter by Singh is based on findings of a “ground-truthing” exercise that was started in 2014 to identify areas that had been left out of the NCZ and those that were included inadvertently.

Environmental activists raised objections to the state government’s decision. “Instead of protecting the Aravalis, the Haryana government is protecting the interests of real estate developers. This is coming at the expense of wildlife and its habitats, air quality and ground water recharge. The government is trying to undermine the decision of the NCR planning board (which said Aravalis are spread in the entire region). This is a brazen attempt to open up Aravalis for real estate,” said Lt Col Sarvadaman Singh Oberoi (retired), an activist.

In a meeting with the state government in 2016, the NCR planning board had also referred to the Centre’s 1992 notification of the Aravalis only in Gurugram and Alwar. The board had then said that the Centre’s delineation could be extended in the “entire NCR region”. 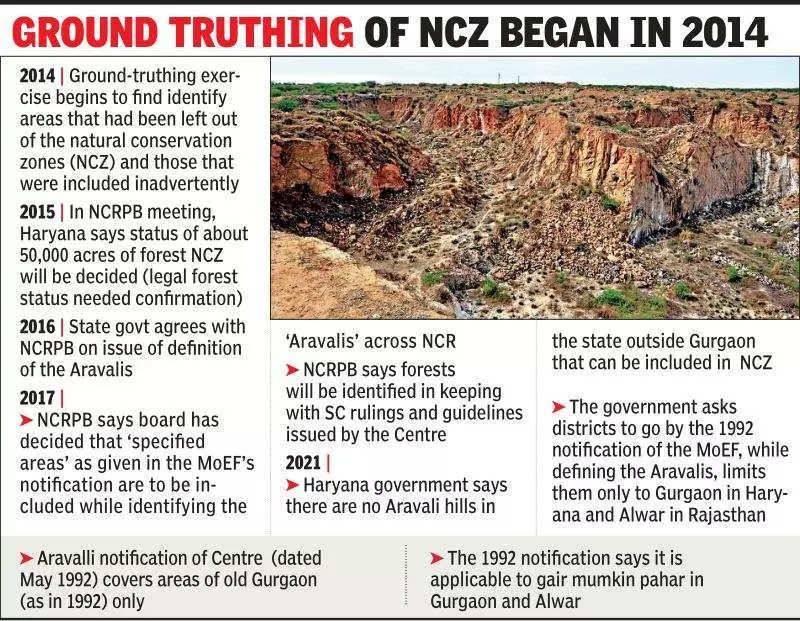 The order has taken many activists by surprise too. They pointed out that several Supreme Court judgments on mining in Faridabad were based on the premise that the activity was banned in the Aravali hills. In a recent verdict, the apex court had also ordered the demolition of 10,000 houses that had come up illegally in Khori village in the Aravali hills of Faridabad.

“There are so many documents showing that the Aravalis exist in other districts too. There are district gazette plans, the forest department’s working reports, the mining department’s documents and most importantly, the Supreme Court’s judgments banning mining. How can the Haryana government question its own documents?” asked RP Balwan, a former forest conservator of Gurugram.

The Haryana government has spent years deliberating on the definition of “forests”. In December 2016, it had agreed with the NCR planning board on the issue of forests. In 2017, the board had referred to the December 2016 meeting with the government and said that “specified areas (i.e. the land categories of Gair Mumkin Pahar or Gair Mumkin Rada or Gair Mumkin Behed or Banjad Beed or Rundh) as given in the MoEF’s notification dated 07.05.1992 are to be included while identifying/delineating Aravalli in entire NCR, by the participating states”.

A senior official in the housing and urban affairs ministry said the Centre’s notification was based on certain Supreme Court judgments regarding mining activities. He added that since they could not reach a specific definition of the Aravalis in previous meetings, they had resorted to the 1992 notification.

The fresh directive of the government, the officials pointed out, thus counters the decision reached at the 2016 meeting between the Haryana government and the NCR planning board.