The $4.1 billion Godrej Group has initiated a formal exercise to divide the businesses between two groups-one led by the families of patriarch Adi Godrej and his brother Nadir, the other by their cousins Jamshyd Godrej and Smitha Godrej Crishna, said people with knowledge of the matter.

Reorganising the consumer goods to real estate and engineering empire has been under discussion for months and has now gathered momentum with Pirojsha Godrej, Adi Godrej’s son, representing that side of the family. Jamshyd is representing the other side, along with Purvez Kesri Gandhi, chief financial officer, Godrej & Boyce. External advisors close to the family-bankers Nimesh Kampani, Uday Kotak and legal experts Zia Mody of AZB & Partners and Cyril Shroff-are also being consulted.

“The Godrej family has been working on a long-term strategic plan for the group for the last few years to ensure best value for its shareholders,” Godrej Industries Ltd (GIL) and Godrej & Boyce told ET in a joint statement.

“As part of this exercise, we have also sought advice from external partners. These discussions between the family remain ongoing,” they said. A resolution is expected in the next six months, according to one of the people aware of the developments.

The 124-year-old business group, which started as a lock company that went on to make the world’s first vegetable oil soap, is among the most respected in India, with the fourth generation of the family involved in business operations.

“It will be a complete large-scale division of assets,” said an executive, who sought anonymity as did all the insiders who spoke to ET. Adi Godrej, said people close to him, would have been happy to maintain the status quo but the new generation wants clarity on ownership.

Other than the privately held Godrej & Boyce, the remaining listed entities-GIL, GCPL, Godrej Properties and Godrej Agrovet-have all been controlled and run by Adi and Nadir’s side of the family. All family members own shares in each other’s companies and have board representation.

The latest move follows Adi Godrej stepping down as the chairman of GIL to serve as chairman of the Godrej Group and chairman emeritus of GIL, elevating Nadir Godrej, who was managing director, to take over from him this month. Besides this, over the years, Adi Godrej has passed the baton to his three children to run various group businesses. Son Pirojsha heads Godrej Properties, the real estate arm of the group, as its chairman. Eldest daughter Tanya Dubash is executive director and chief brand officer for the group. Youngest daughter Nisaba Godrej has been heading Godrej Consumer Products Ltd (GCPL), the single largest company in the group, as its chairperson since 2017. 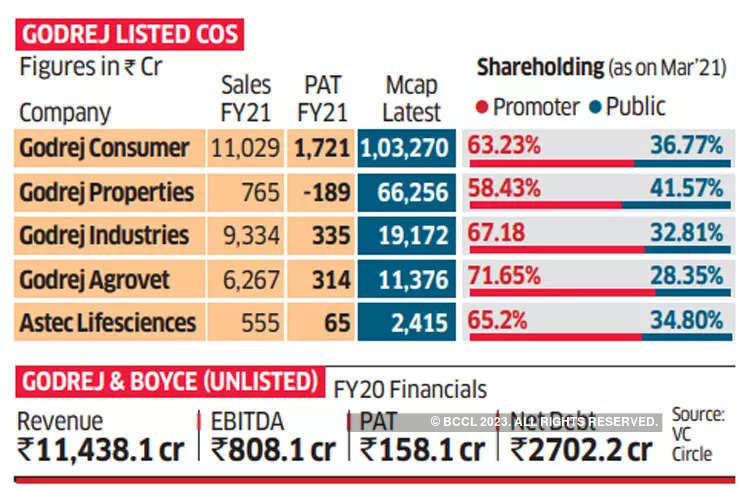 Adi Godrej’s low-profile cousin Jamshyd Godrej heads Godrej & Boyce Manufacturing Co. as chairman. It’s also the holding company of the conglomerate and he’s on the board of all other key group companies.

Of Nadir Godrej’s children, Burjis is head of special projects at Godrej Agrovet and Shohrab is with GIL.

Jamshyd Godrej’s sister Smitha does not have any role in the business, apart from being a shareholder. Her husband Vijay Crishna is on the board of group companies and her daughter Nyrika Holkar, a lawyer by training who worked closely with Zia Mody’s AZB & Partners, has been steering Godrej & Boyce for the last five years as its executive director. Jamshyd Godrej’s son Navroze is a non-executive director in Godrej & Boyce but is not part of any business.

The division is also aimed at resolving differences, talk of which first emerged when CNBC TV18 reported in 2019 on rifts over the usage of 1,000 acres of prime land at Vikroli, a Mumbai suburb, said the people cited above. These differences also relate to business strategy, hands-on involvement of generation next and the way each of them wants to drive the group forward, said a long-time group associate.

“There are a lot of cross-holdings among family members and the family trusts that need to be disentangled. Most of them sit on boards of the group company-the brand is common. There is another cousin of Adi, Rishad, who does not have kids of his own but is a shareholder. So it is a complicated process,” said an exsecutive involved in the ongoing discussions. “The aspirations of the future generation and their thinking are very different and that is at the root of a formal separation of roles and businesses. Some of the businesses have grown much bigger so there is inequality as well.”

For example, as per an internal valuation by Adi Godrej’s side, businesses under GIL-consumer, properties, agrovet, lifesciences along with industries-are pegged at Rs 1.5 lakh crore, much more than that of Godrej & Boyce, giving ample room to unlock value. However, sources close to Jamshyd Godrej said the land holdings under Godrej & Boyce alone offer significant upside.

As of March 2020, the families of Adi Godrej, Nadir Godrej, Jamshyd Godrej, Smita Vijay Crishna and Rishad Godrej (RKN Enterprises) each hold a 15.33% stake in Godrej & Boyce, while the Pirojsha Godrej Foundation holds a little over 23%.

Group companies have performed differently during the pandemic. Godrej & Boyce, the largest private landowner in Mumbai, used its manufacturing and consumer appliances expertise to focus on specialised refrigeration for Covid vaccine storage.

GCPL’s stock has seen a steep rally of around 50% following Sudhir Sitapati’s appointment as managing director and CEO in May this year, effective October 18. Analysts said an earnings upgrade will depend on the CEO’s execution and sales performance with regard to the India business as well as recovery in global businesses.

After a muted first quarter, Godrej Properties is also seeing a sharp recovery with the company announcing last month that its Godrej Woods project in Noida, Uttar Pradesh, achieved sales of Rs 575 crore in one day after the launch of the second phase. Strong demand from new launches has been a key trigger for the stock, which has touched record highs. The management has indicated a pickup in sales with four to five launches in the September quarter–two each in National Capital Region (NCR) and one each in Bengaluru and Pune.