NEW DELHI: Delhi Development Authority has received over 12,000 suggestions and objections regarding the draft Master Plan for Delhi 2041, which was put in public domain 75 days ago. Monday was the last day to submit public inputs.

The draft MPD41, meant as a strategic and enabling framework for a sustainable and liveable Delhi in two decades, was made open to the public on June 9, originally for 45 days but later extended to August 23.

The official said that the suggestions and objections would now be subjected to online public hearings on different issues such as environment, transport and housing likely in October. DDA plans to notify MPD41 by the end of this year or at the most, by early next year.

Among the many suggestions are those submitted by Save Our City campaign, an umbrella group of RWAs, NGOs and activists, which has held the mixed land use policy for being the cause of chaos in the city. The campaign opined that the policy has prompted rampant commercialisation, which has increased congestion and added pressure on infrastructure like water, power, roads and parking. “The draft MPD41 seems to be a document of hope rather than redemption. It fails to address the problems the city is grappling with,” maintained Rajiv Kakria, convener of the campaign. 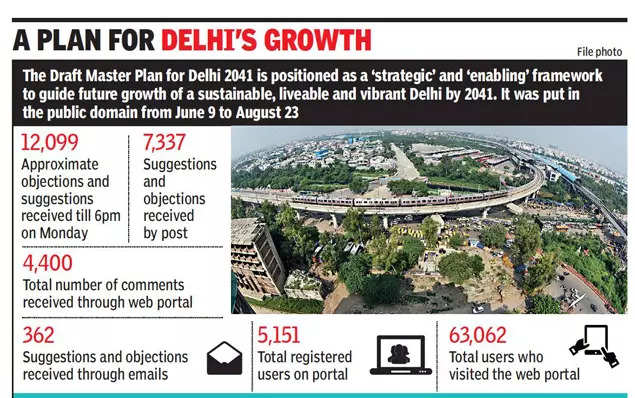 Kakria’s group said, “Commercialisation of residential colony is a security and environmental nightmare, not to mention its impact on social fabric. Delhi has become a nonstop urban jungle in seismic zone IV with intermingling habitat and livelihood and unplanned rickety structures, everything being the result of a flawed MPD21.”

Among suggestions and objections DDA received was one from East Delhi RWAs Joint Front on the issue of the increasing number of vehicles in the city and the lack of adequate parking. “Surprisingly, Delhi had over 75 Lakh vehicles in 2019, but the parking space available was for less than one lakh vehicles,” the front said. “And the government hasn’t yet introduced any checks on the sale of vehicles in the city.” 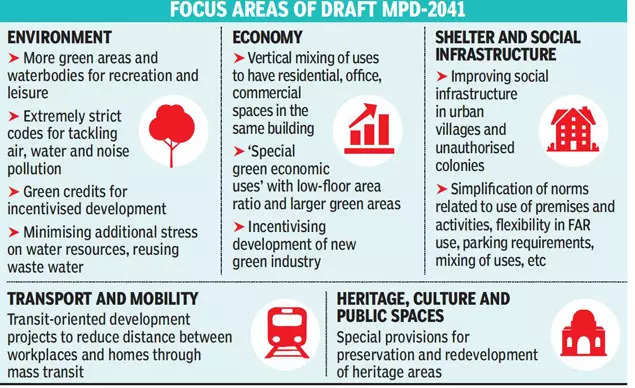 Arguing that existing parking norms have failed to solve the problem, B S Vohra, front president, submitted that though 20% of the land area in Delhi consisted of streets, the residents had to “face traffic jams at almost every corner, contributing towards air and environmental pollution in the city”.

Manoj Misra, convener, Yamuna Jiye Abhiyan, said that while he welcomed the draft MPD-2041 saying upfront that its focus was on environment, it shouldn’t have been taken up as a standalone subject. “Environment is not just a chapter, but should figure in all the chapters related to transport, shelter, infrastructure, etc., because environment is overarching,” argued Misra.

“Environment in Delhi is not just the Yamuna and the Ridge, it is also air and water quality and the quality of life per se.” He added that by treating environment as just one of the contentious subjects, justice couldn’t be fully done to it.