Protests intensify at China Evergrande Group offices across the country as the developer falls further behind on promises to more than 70,000 investors. Construction of unfinished properties with enough floor space to cover three-fourths of Manhattan grinds to a halt, leaving more than a million homebuyers in limbo.

Fire sales pummel an already shaky real estate market, squeezing other developers and rippling through a supply chain that accounts for more than a quarter of Chinese economic output. Covid-weary consumers retrench even further, and the risk of popular discontent rises during a politically sensitive transition period for President Xi Jinping. Credit-market stress spreads from lower-rated property companies to stronger peers and banks. Global investors who bought $527 billion of Chinese stocks and bonds in the 15 months through June begin to sell.

While it’s impossible to know for sure what would happen if Beijing allows Evergrande’s downward spiral to continue unabated, China watchers are gaming out worst-case scenarios as they contemplate how much pain the Communist Party is willing to tolerate. Pressure to intervene is growing as signs of financial contagion increase.

“As a systemically important developer, an Evergrande bankruptcy would cause problems for the entire property sector,” said Shen Meng, director of Chanson & Co., a Beijing-based boutique investment bank. “Debt recovery efforts by creditors would lead to fire sales of assets and hit housing prices. Profit margins across the supply chain would be squeezed. It would also lead to panic selling in capital markets.” 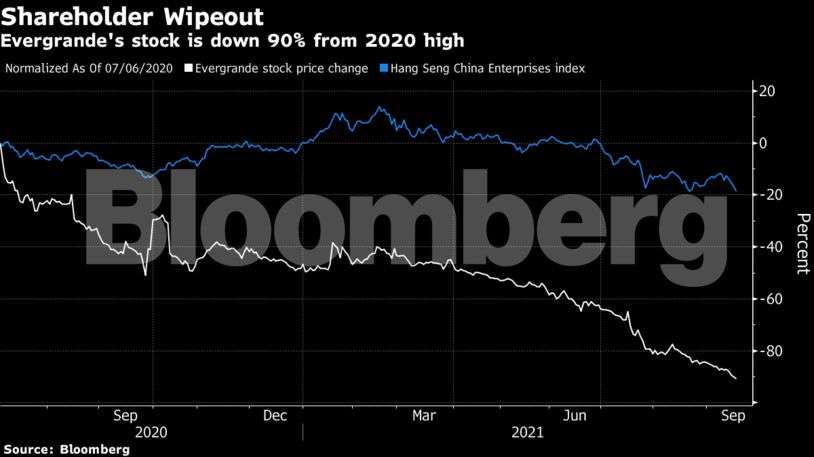 For now, Shen and nearly all of the other bankers, analysts and investors interviewed for this story say Beijing is in no mood for a Lehman moment. Rather than allow a chaotic collapse into bankruptcy, they predict regulators will engineer a restructuring of Evergrande’s $300 billion pile of liabilities that keeps systemic risk to a minimum. Markets seem to agree: the Shanghai Composite Index is less than 3 per cent from a six-year high and the yuan is trading near the strongest level in three months against the dollar.

Yet a benign outcome is far from assured. Beijing’s bungled stock-market rescue in 2015 showed how difficult it can be for policy makers to control financial outcomes, even in a system where the government runs most of the banks and can exert outsized pressure on creditors, suppliers and other counterparties.

Contagion risk was on full display Thursday. Chinese junk-bond yields jumped to an 18-month high and shares of real estate companies plunged after Evergrande had its credit rating downgraded and requested a trading halt in its onshore bonds. Some banks in China appear to be hoarding yuan at the highest cost in almost four years, a sign they may be preparing for what a Mizuho Financial Group Inc. strategist called a “liquidity squeeze in crisis mode.” 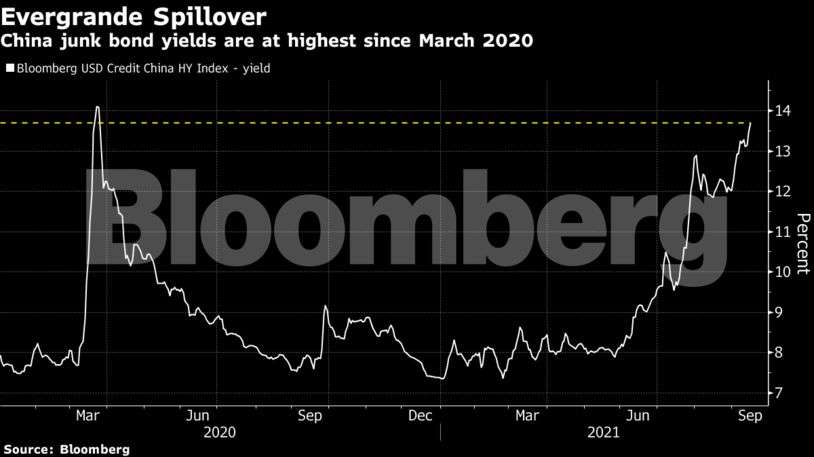 Where Xi will ultimately draw the line remains a mystery. While China’s top financial regulator has urged billionaire Evergrande founder Hui Ka Yan to solve his company’s debt problems, authorities have yet to spell out whether the government would allow a major debt restructuring or bankruptcy.

Even senior officials at state-owned banks say privately that they’re still waiting for guidance on a long-term solution from top leaders in Beijing. Evergrande’s main banks were told by China’s housing ministry this week that the developer won’t be able to make interest payments due Sept. 20, according to people familiar with the matter.

China’s government isn’t averse to taking over companies from the private sector if needed. It seized Baoshang Bank Co. in 2019 and assumed control of HNA Group Co., the once-sprawling conglomerate, in early 2020 after the coronavirus pandemic decimated the company’s main travel business. Court-led restructurings have also become more common in recent years, with more than 700 being completed in 2020.

The Evergrande endgame may depend largely on how Xi decides to balance his goals of maintaining social and financial stability against his multi-year campaign to reduce moral hazard. The timing is particularly tricky as China juggles an economic slowdown, a sweeping crackdown on the private sector and rising tensions with Washington — all in the runup to a once-in-five-year leadership reshuffle in 2022 at which Xi is set to extend his indefinite rule.

“Property is the biggest bubble that everyone has been talking about in China,” Yu told Everbright Sun Hung Kai analyst Jonas Short in a recent podcast. “So if anything happens, this could clearly cause systematic risk to the whole China economy.”

Here are some of the factors that may sway Chinese leaders:

Maintaining social order has always been paramount for the Communist Party, which has little tolerance for protests of any kind. In Guangzhou, homebuyers surrounded a local housing bureau last week to demand Evergrande restart stalled construction. Disgruntled retail investors have gathered at the company’s Shenzhen headquarters for at least three straight days this week, and unconfirmed videos of protests against the developer in other parts of China have been shared widely online.

Evergrande had 1.3 trillion yuan ($202 billion) in presale liabilities at the end of June, equivalent to about 1.4 million individual properties that it has committed to complete, according to a Capital Economics report last week.

“If Evergrande had to dump its inventory onto the market” it would “drag down property prices substantially,” said Hao Hong, chief strategist at Bocom International.

Without a social safety net and with limited places to put their money, Chinese savers have for years been encouraged to buy homes whose prices were only ever supposed to go up. Today, real estate accounts for 40 per cent of household assets and buying a house (or two) is a cultural touchstone. While housing affordability has become a hot topic in the West, many Chinese are more likely to protest falling home prices than spiking ones.

“Given that the bulk of people’s wealth is already in property, even a 10 per cent correction would be a serious knock to many people,” said Fraser Howie, an independent analyst and co-author of books on Chinese finance who has been following the country’s corporate sector for decades. “It would certainly knock their hopes and dreams and expectations about what property is.”

Another potential flashpoint is whether Evergrande can repay high-yield wealth management products that it sold to thousands of retail investors, including many of its own employees. About 40 billion yuan of the WMPs are due to be repaid, according to Caixin, a Chinese financial news service. Evergrande is trying to free up cash by selling assets, including stakes in its electric-car and property-management businesses, but has so far made little progress.

Evergrande is the largest high-yield dollar bond issuer in China, accounting for 16 per cent of outstanding notes, according to Bank of America Corp. analysts. Should the company collapse, that alone would push the default rate on the country’s junk dollar bond market to 14 per cent from 3 per cent, they wrote in a note this month.

While Beijing has become more comfortable with allowing weaker businesses to fail, an uncontrolled spike in offshore funding costs would risk derailing a key source of financing. It could also undermine global confidence in the country’s issuers at a time when Beijing is pushing for larger foreign investor ownership. Yields on China’s junk dollar bonds are nearing 14 per cent, up from about 7.4 per cent in February, according to a Bloomberg index. 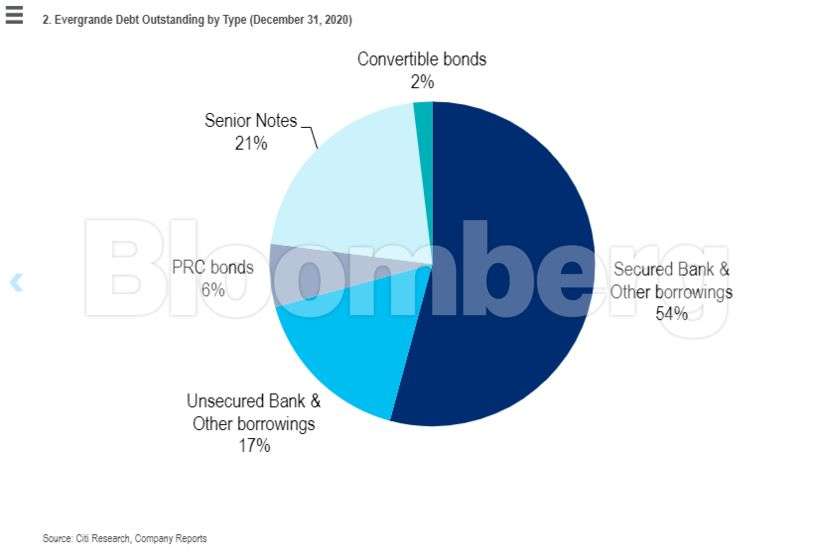 The stakes are higher on the mainland, where the credit market is about 15 times the size at $12 trillion. While Evergrande is less of a whale onshore, a collapse could force banks to cut their holdings of corporate notes and even freeze money markets — the very plumbing of China’s financial system. In such a credit crunch, the government or central bank would likely be forced to act. Banks involved in property lending may come under pressure, leading to an increase in soured loans. Smaller banks exposed to Evergrande or other weaker developers may face “significant” increases in non-performing loans in the event of a default, according to Fitch Ratings.

Economic Impact
Concern over Evergrande comes at a time when China’s economy is already slowing. Aggressive controls to curb outbreaks of Covid-19 are hurting retail spending and travel, while measures to cool property prices are taking a toll. 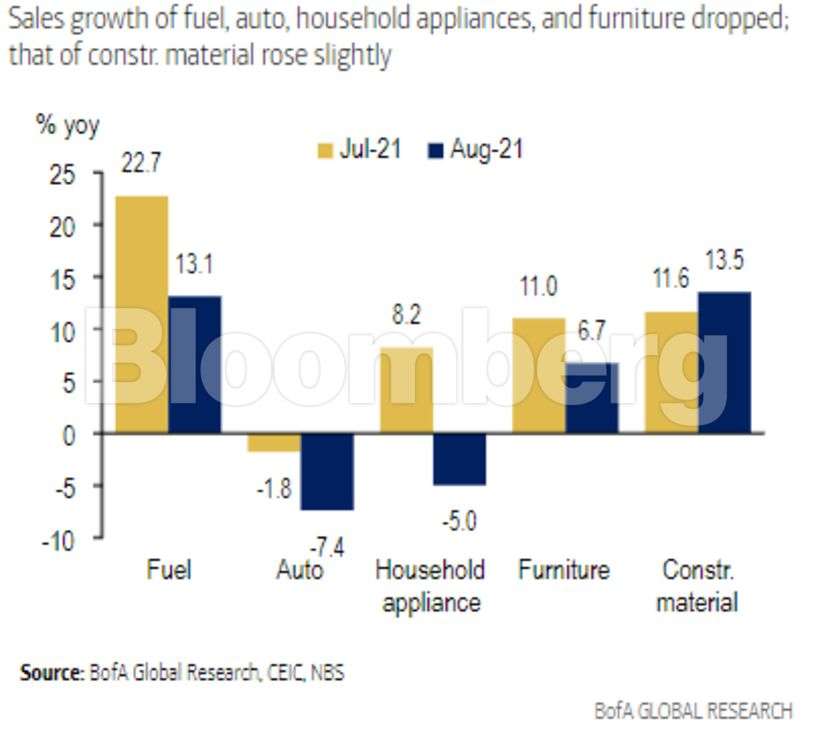 Data this week showed home sales by value slumped 20 per cent in August from a year earlier, the biggest drop since the onset of the coronavirus early last year. Responding to a question on Evergrande’s potential impact on the economy, National Bureau of Statistics spokesman Fu Linghui said some large property enterprises are running into difficulties and the fallout “remains to be seen.”

China’s current priorities of promoting “common prosperity” and deterring excessive risk-taking mean there’s unlikely to be any easing of property curbs this year, according to Macquarie Group Ltd. The sector will be a “main growth headwind” for next year, although policy makers may loosen restrictions to defend growth goals, Macquarie analysts wrote in a Wednesday note.

A correction in China’s property market would not only slow the domestic economy but have global consequences too.

“A significant slowdown in property construction over the next few years appears probable already, and would become even more likely in the event of an Evergrande failure or bankruptcy,” said Logan Wright, a Hong Kong-based director at research firm Rhodium Group LLC. “A long-term slowdown in property construction, an industry that represents around a fifth or a quarter of China’s economy by most estimates, would cause a significant decline in GDP growth, commodity demand, and would likely have disinflationary effects globally.”