CHANDIGARH: The UT administration has written to the ministry of home affairs (MHA) for giving in-principle nod for conversion of leasehold properties into freehold in commercial and Industrial Area, phases I and II, a long-pending demand of industrialists.

UT adviser Dharam Pal has recently met MHA officials and made the demand. In the coming days there will be a detailed meeting between the ministry and UT officials.

Last year before the coronavirus lockdown was enforced, the matter was discussed in a meeting between UT officials and members of Industrial Advisory Committee of Chandigarh.

The UT had last converted leasehold plots into freehold in 1983 in commercial category. The matter was also taken up by MP Kirron Kher with the MHA and ministry of urban development. 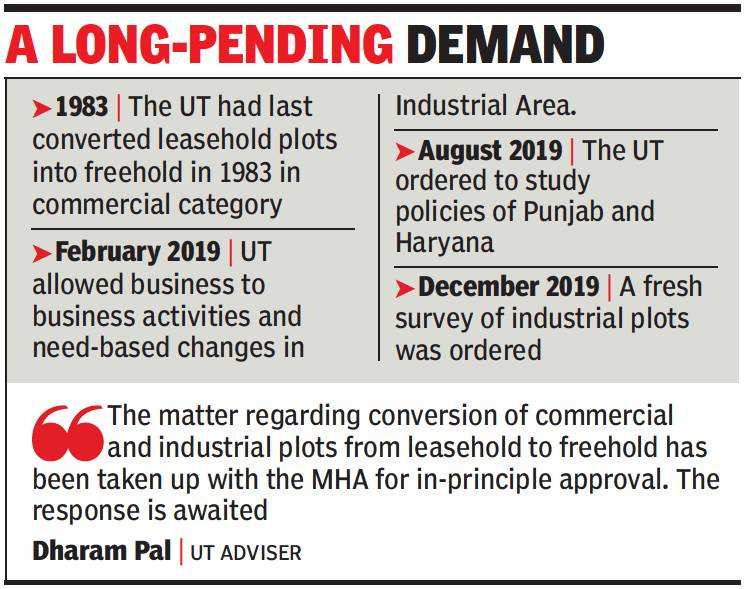 Industrial Area was set up in the 1970s

The administration had set up phases I and II of Industrial Area during the 1970s on an area measuring 147 acres. The plots are governed by zoning and architectural control, which were prepared as per the conditions prevailing at that time. There are1,884 plots in both phases, of which 700 are 1 kanal and above, while there are 443 and180 plots measuring10 and15 marla, respectively. There are as many as 381 plots of 5 marla.

Certain need-based changes in architectural controls in line with modern day industrial requirements was allowed. The UT had even allowed cycle stands for purposes such as storage of raw material and industrial functions. UT had stated that in the wake of thefts in industrial areas, partial covering of central courtyard with poly carbonate sheets was allowed.