CHANDIGARH: The UT administration has planned to make Chandigarh Housing Board (CHB) as a nodal agency for land pooling policy to utilise available vacant land in the city according to the Master Plan 2031.

In the initial phase, land pooling policy will be introduced in UT villages.

Recently, UT administrator Banwarilal Purohit had asked the administration to utilise available vacant land, prompting it to look to overcome the constraint of availability of land through introduction of the policy.

Bengaluru-based Indian Institute of Human Settlement has been entrusted with the task of formulating a land aggregation and pooling policy that will help the UT to utilise surplus land for development works. 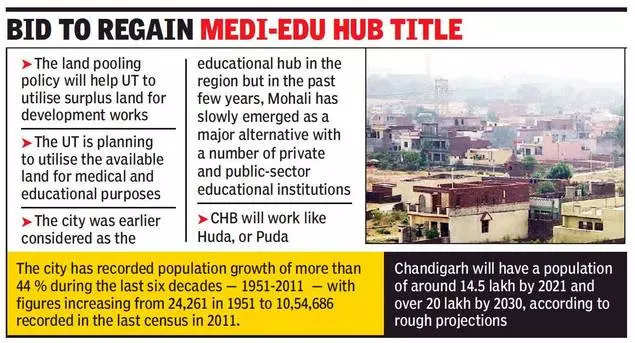 The administration has asked different departments to submit details of available and encroached land and a policy would be formed accordingly. Most of the potential vacant land is locked in different pockets, predominantly in villages in the city’s periphery.

A major chunk of this land is facing serious threat of encroachments and illegal constructions. To utilise it, the administration is working on a development plan which will allow integration of villages in the sectoral plan of the city, sources said.