Tamil Nadu has drawn up its first draft resettlement and rehabilitation policy. While this is a significant step, the draft policy in its present form leaves much room for improvement.

First, the term ‘encroachers’ has been defined in this policy as “non-titleholders who have illegally occupied objectionable poramboke lands including water courses for residential, business and/ or other purposes”. However, this term has not always been used to refer to those living along water bodies, including in The Tamil Nadu Slum Areas (Improvement and Clearance) Act, 1971.

Earlier, residents of slum settlements were rightfully recognised as workers who create and maintain the city. Surveys of slum residents in Chennai including the first set of 1,202 slums officially declared through this legislation included details on their occupation, recognising the significance of their livelihoods in the consideration of where they lived.

As per a Supreme Court order issued in 1988 in response to a case filed by Pennurimai Iyakkam, a movement mobilising poor women for tenure security and basic services, alternate accommodation of evicted slum dwellers must be such that their livelihoods are not affected.

However, these considerations have been forgotten, with eviction emerging as the primary mode of intervention in cities over the past two decades. As a result, families have lost their homes, and mostly found themselves rehoused in peripheral resettlement colonies in economic distress, and without educational opportunities and social networks.

The term ‘encroachers’, however, does not apply to the users of middle and elite residential and commercial buildings, even government buildings that are located along water bodies and on flood plains.

While the policy draft acknowledges the need to consider “views of the people impacted by resettlement”, there is no room for meaningful participation. In the pre-resettlement stage, the decision to evict is to be undertaken by a district-level committee constituting only government departments. The people to be evicted are only to be “informed,” and the “acceptance” of the new settlements is to be ensured.

The policy is also divorced from processes of land acquisition, meaning people have no control over the decision to evict, unlike in the Right to Fair Compensation and Transparency in Land Acquisition, Rehabilitation and Resettlement Act, 2013, at the central level.

While the draft policy also says that information about evictions is to be disseminated widely, in reality eviction notices are rarely provided to settlements, thereby leaving people with no option of contesting the eviction legally in a timely manner. The policy only seems interested in grievances on who is to be included and excluded from resettlement. 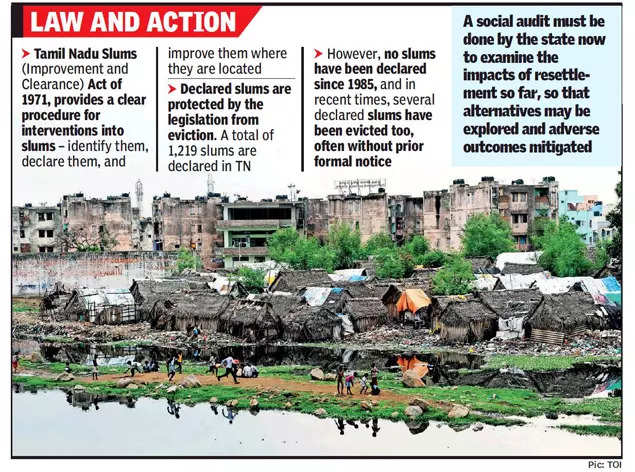 The policy also says that lands affected by pollution and degradation are “to be avoided” as a site of resettlement, but this again is only an attempt to convey the intention of the government. It is open to interpretation and neglect, and offers no accountability or legal protection from these circumstances for those to be evicted.

Most significantly, the policy only stipulates that a social audit be undertaken two years after resettlement, unlike standard international practice that demands social impact assessments be undertaken before the eviction.

There is no guarantee or accountability to ensure that residents receive adequate essential infrastructure at the resettlement site, even though the policy recognises that these infrastructures are necessary. There is commitment to safe drinking water, proper drainage and sanitation plans, but no further details. There is thus no information on government norms for the public to reckon with, nor a guarantee that existing problems with resettlement tenements — irregular garbage collection, ill-maintained sewage systems, leaky pipes, poor quality of construction of tenements, absence of piped drinking water — will not continue.

In accordance with the affordable housing in partnership component of the Prime Minister Awas Yojana (PMAY) housing scheme, there has been an increased emphasis on building and rebuilding tenements, often with eight or 10-storeys. Older residents frequently find they are allotted top floors, with elevators not working properly, as in the K P Park resettlement. A government order in 2020 asks beneficiaries of housing tenements to pay at least ₹1.5 lakh as beneficiary contribution. These payments are unaffordable for daily wagers, and an unfair demand in light of the substandard quality of the houses.

The absence of tenure security for those who are resettled or details on the legal documents they will receive upon resettlements, is another instance indicating the policy is designed to remove the urban poor from the core city areas without guaranteeing any protection for them.

Finding a way out

The new resettlement and rehabilitation policy draft can take hints from past policies. Under the initial phases of the Madras, later Tamil Nadu Urban Development Projects, insitu improvement of slums was emphasised, alongside the provision for tenure security in the form of land title. Urban poor residents must be given the support system to build their own housing, with hire purchase agreements that entail paying dues over years towards ownership of the house. Where in-situ improvement is not possible, slums must be relocated within a five-kilometre radius of the original location, as recommended by the Rajiv Awas Yojana (RAY). To do this, the RAY mandated that all cities map all the vacant lands available in the city. This must be done immediately, so as to explore possibilities for slum dwellers. A ray of hope comes from the residents of Radhakrishnan Nagar being rehoused in K P Park recently instead of Perumbakkam.

District-level committees deliberating on evictions must constitute at least 50% of potential evictees. Reasons for eviction must be deliberated on by residents, considering how many evictions have occurred without the associated project taking off. A social audit must be done by the government now to examine the impacts of resettlement so far, so that alternatives may be explored and adverse outcomes mitigated.

(R Geetha is adviser to the Unorganized Workers’ Federation. Priti Narayan is assistant professor at the University of British Columbia)