AMARAVATI: The state government has decided to develop layouts to offer housing plots for middle- class families in urban areas.

It is expected to promote planned and integrated development of various towns. The plan is to address aspirations of Middle-Income Group for quality housing and allied infrastructure. The government will take all measures to provide basic infrastructure facilities including roads, drains, water supply and electricity in the proposed layouts. The plots will be sold to the families from the MIG as per the price fixed by the state government.

The state government has constituted a high-level committee headed by municipal administration secretary to oversee the entire project. Special officer, MIG project, director of town and country planning, public health engineer-in-chief, joint collector of respective district and vice-chairman/managing director of urban development authority would be members of the high-level committee.

“The land shall be identified by giving preference to immediate salability. The land parcels so identified shall be within 5 kms from the ULB boundary. However, immediately saleable land may be proposed even if located at more than 5 kms distance along with suitable justification,” said Y Srilakshmi, special chief secretary (municipal administration). 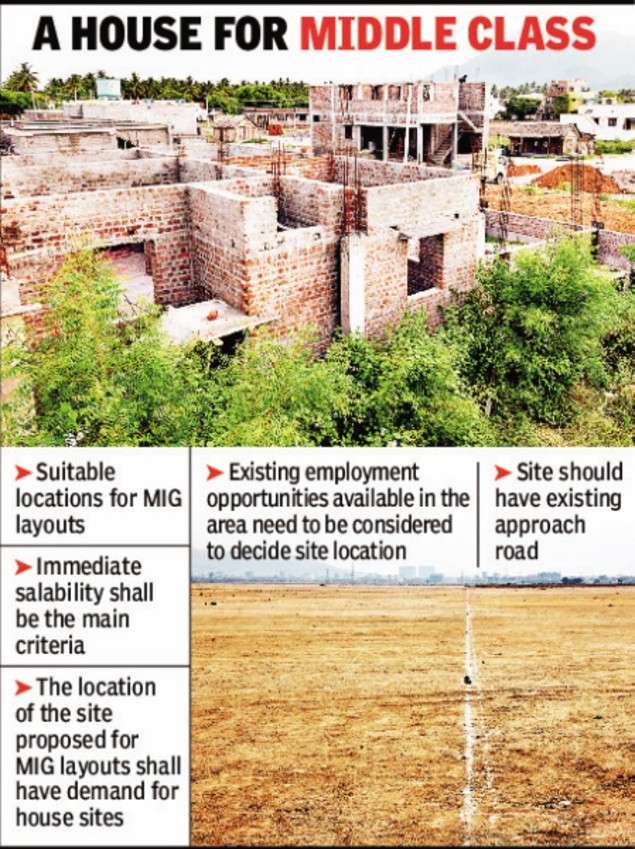 She asked district collectors to give priority to take over government land, including those owned by government undertakings /assigned land which are free from encroachments and litigations in accordance with the procedure under law. “The private lands can also be identified which can be purchased under LARR Act, 2013 as amended by Act 22 of 2018 and the Rules,” she noted.

Keeping in view of the response received during the initial survey, the district collectors suggested the government to include various modes of project execution so as to maximize the outreach of the scheme and also increase the affordability of the house sites for the MIG Sections. Subsequently, the collectors have been directed to handover advance possession of suitable and vacant government land to municipal administration and urban development department.