LUDHIANA: Amid the controversy over land auction by the Ludhiana Improvement Trust (LIT) in Model Town Extension, local government minister Brahm Mohindra said a decision has been taken to cancel it. He told TOI that the decision was taken after receiving an LIT resolution recommending it.

“We have cancelled it. The probe will continue,” the local government minister said on Friday. Earlier, he had confirmed that the principal secretary, local government, had been asked to probe the matter.

On August 16, 29 properties of LIT were auctioned at Rs 129 crore. Of these, a prime land measuring 16,344 square yards was auctioned for Rs 98 crore and it was alleged that its market value was around Rs 350 crore, leading to a row, LIT chairman Raman Balasubramanium had claimed that rates of property were not fixed by a deputy commissioner-led committee. The DC, however, had refuted the claims.

The minister said, “We have taken a serious note of it. Case files are being prepared. I have asked principal secretary, local government, to personally look into the matter and take action. The issue is being probed for the past about three days.”

Asked if vigilance probe could be ordered, as is being demanded by the opposition parties, he replied “Let the files come.” Regarding reauction, he said, “That will be for the LIT to decide.”

The minister added, “Whosoever is found guilty, we will take action against them. We have asked for a report from the Ludhiana deputy commissioner.” A report has also been sought on the role of the DC, he indicated.

“Those involved in the scam should be punished. Guilty LIT officials should be booked and sent to jail. The earnest money of the parties should be held and deposited in government treasury,” said district president of AAP, Ludhiana (urban), Suresh Goyal. 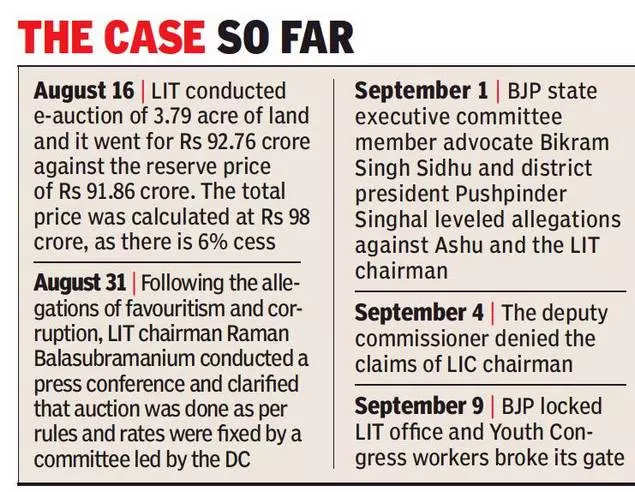 “It is good that they have cancelled it. But how did they allow it? Action should be taken against the persons involved in the scam. It wouldn’t have been possible without the involvement of officials,” said SAD district president Ranjit Singh Dhillon.

A day after BJP leaders locked the LIT office, chairman Raman Balasubramanium hit back on Friday, claiming when the saffron party had its chairman in LIT, it party took land in Model Town Extension Part 2 in Block D for building an office at subsidised rates. Now they are levelling allegations against him even when he had auctioned the land in transparent manne, he alleged.Recommended deal cancellation: Ashu

While the opposition parties have filed a complaint with the Enforcement Directorate, CBI and other authorities alleging corruption in the recent auctions by LIT, food and civil supplies minister Bharat Bhushan Ashu, who has been quiet on the issue for more than a week, on Friday said that he has recommended cancellation of the auction to the Punjab government.SAD and BJP, who had been raising the issue, said the minister had to take the step following their complaint.

Ashu, who has tweeted about it, said, “A lot of hue and cry has been raised by the opposition without checking the facts. Even as there is no foul play in the auction, I have asked the Punjab government to cancel it, just to come out clean and transparent on the issue. I have requested for a re-auction of this land. Those who were offering more money can participate in it.”

Balasubramanium refuted the SAD and the BJP allegations and said, “I have said it earlier also, final call is to be taken at government level. If auction gets cancelled, I have no issue with it.”