HYDERABAD: Amid tight security, civic authorities demolished 43 unauthorised structures at Gopanpally tanda, near Tellapur, built on government land. The drive was carried out by the radial roads division of the roads and buildings department to make way for six radial roads in the area.

Mild tension prevailed at the demolition site when half a dozen earth movers reached the spot around 8 am on Saturday, leaving residents and traders agitated. About 150 policemen from six police stations under the Cyberabad commissionerate had to be deployed to avoid any untoward incident.

“We are shocked to see them demolish our properties since the officials did not intimate us about it. They did not give us time to vacate the premises,” said K Prabhavathi, a local of the area. Another resident, Hanumanthu, said, “Half of my grocery shop has been affected. I have lost my bread and butter,” he rued.

Dr Vanishree, a gynaecologist said, “We have been running the hospital for the past four years and now authorities have turned up to demolish it.” 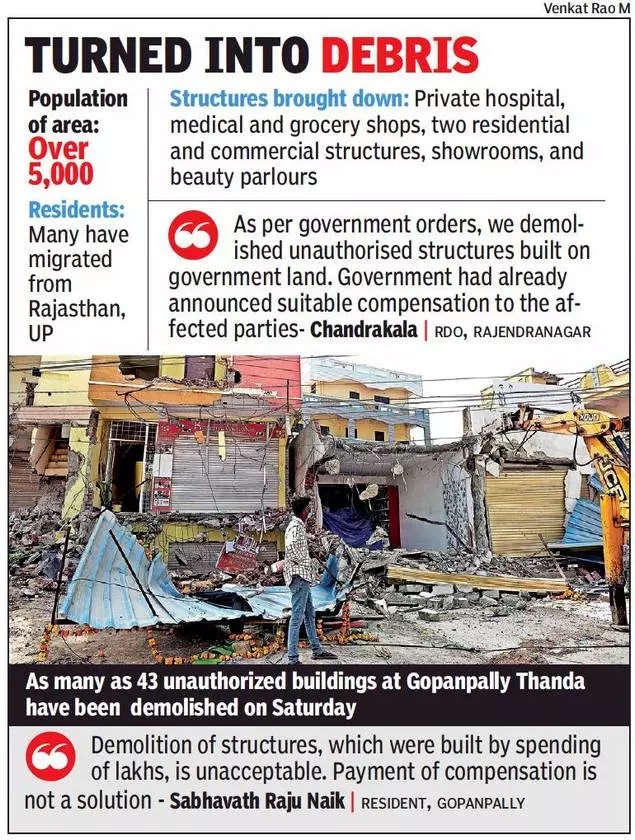 According to authorities, the properties — residential and commercial — have encroached on government land (Sy No 34). “Apart from these, we have to acquire another 15 properties built on private land for the project. These owners will be compensated accordingly,” said Rajendranagar RDO, Chandrakala. She added: “We served notices to all owners three times asking them to vacate the premises. Only after that we have started demolition.”

According to deputy engineer, R&B (radial roads division), Krishna Reddy, a two-lane flyover has been proposed at Gopanpally tanda connecting Tellapur and Outer Ring Road that would benefit over 1.5 lakh commuters. “The state government is spending ₹11 crore to build it. It has been delayed due to land acquisition,” he said.